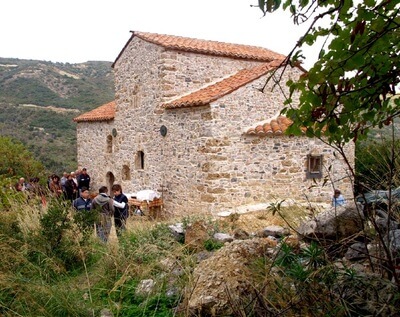 In place of the historical Monastery Cascade is now the Convent of St. Demetrios.
The church of Agios Dimitrios Waterfall is located northeast of the village of eight, in a verdant valley and near a small waterfall, from which it took its characteristic name. The church was the Catholic monastery of the same name. Near the church stands the fountain of the monastery. Cells no longer are only stone pile.
The church is cross-shaped and recorded good frescoes. The hagiography was in 1633-1636.
In the revolution of 1821 the abbot Paisios the monks rose up against the Turks and often offered money and ammunition to the fighters. Fueled repeated waves ships and assisted financially. Therefore Omer bey the Karystinlis was angry with them. Returning from Kimi in 1821 camped in Alonia area boundary settlement and wild plundered the monastery. Destroyed cells and having captured the abbot of Paisios with eleven other monks, their carrying Alonia and killed them.
In 1831 the monastery was deserted, he died and the elder monk who was appointed abbot of Omer Bey. He succeeded the monk Ananias, who assumed custody of the devastated monastery until 1843. In 1833 the monastery was completely deserted by Bishop James Halkida. The looting of the monastery was complete. Looting of James confirmed by autopsy of the monastery mayor of the former municipality Distion, following orders of Karystia.
The monastery after its dissolution was attached to the monastery White as a dependency. Later, he landed the property was sold to local residents.